Charles is a native of South Carolina. Early on in Charles’ life, he experienced the trauma associated with a horrific auto accident. When he was a child, his family was in a terrible accident that involved a vehicle defect. As a result, his parents suffered serious injuries, and Charles’ childhood would never be the same. The inability to help his family in the aftermath of this accident left a mark. That feeling of helplessness he felt is what drives him every day to fight for other people who deserve a voice.

Charles’ father, Dr. Buist, is a dentist, and he raised Charles alone. Hence, Charles spent a lot of time in a dentist office while he was growing up, and he started working as a dental assistant at an early age. Charles saw many horrific cases where patients would come to Dr. Buist after being injured by another dentist. He witnessed many patients who were harmed by careless or reckless dentists. Some of them were permanently injured.

Over time, Charles’ childhood experiences and his experiences at his father’s dental practice turned into a resolve to help injured people. Charles wanted to help give people a voice and guide them to justice when they had been wrongfully injured. Thus, he decided to become a trial lawyer.

Charles went to the College of Charleston for his undergraduate degree, and he comes from a long line of Charleston, South Carolina attorneys. In fact, the Buist family started one of the oldest law firms in Charleston in the 1800s. The firm was called Buist & Buist, but it later changed names in the 1970s after merging with another law firm and eventually became Buist, Moore, Smythe & McGee. Although Charles considered moving back to Charleston many times, he and his wife ultimately fell in love with Orlando, Florida. After law school, Charles visited his law school roommate, Nick Spetsas, in Orlando for a New Years' weekend and absolutely fell in love with the area. The parks, the people, the beauty, and the year-round sunshine make Orlando the perfect location for Charles and his family, and they are proud to call Orlando their home. 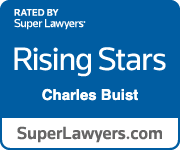 Charles and his law partner, Nick Spetsas, are based in Orlando, Florida. In 2022, Super Lawyers selected Charles for inclusion in Super Lawyers Rising Stars, which is an honor bestowed upon only 2.5% of the lawyers in the state of Florida.

Charles is married to Alexa Buist, and they currently have one little baby boy, Charles R. Buist III. Charles met Alexa at the University of South Carolina in August 2017, and they got married in March 2020. They were blessed with little Charlie in December 2021. He’s a wild little baby, and he loves eating, sleeping, and pulling out daddy’s chest hair.

Charles and Alexa met in the gym at the University of South Carolina. They both love fitness and adventure, and when they aren’t spending time with their little boy, they enjoy traveling, hiking, fitness, and anything outdoors. They really love the beaches in Florida, and Charles likes freshwater fishing when he has the opportunity.

Charles enjoys making creative content and writing. After law school, Charles had a long list of things he wished he’d known before entering law school. As a result, Charles wrote and published a book called How to Crush Law School: Graduate at the Top of Your Class and Land the Job of Your Dreams. The book quickly jumped to the top of Amazon’s law school guide category.

Charles loves creating audio content, and he launched a podcast back in 2018 to help law students succeed in law school. The podcast included interviews with various top law school performers and a variety of tips and tricks relevant to law school success. Charles also enjoys self-improvement books, graphic design, and animation. He found a way to bring those passions together by creating content for a YouTube channel. He has created various animated book summaries, which has gained thousands of followers and views. In the process of making this content, Charles became very proficient with animation software, and now he uses those skills to teach clients about personal injury law and to produce content for Spetsas Buist PLLC.

Based in Orlando, Serving All of FLORIDA, GEORGIA, and the CAROLINAS

You can expect our best work and a personal touch. When you trust us with your case, you can rest assured that we are all in and that we’re going to get you the best results we can.