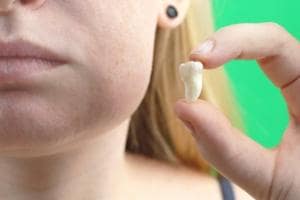 Air emphysema after a dental procedure occurs when air gets trapped in the subcutaneous tissues of the face, cheeks, neck, or chest. This type of air emphysema is more academically referred to as “subcutaneous facial emphysema” or SFE. For purposes of this article, we will use the simple terminology: air emphysema.

Air emphysema is a very serious condition that can cause death, infection, blindness, and a host of other complications. If a dentist fails to recognize and diagnose air emphysema, this could be a breach of the standard of care, and it could result in a dental malpractice lawsuit.

Air emphysema in dentistry is almost always caused by the use of the wrong handpiece or the improper use of a handpiece. Many types of high-speed dental handpieces generate air, and when used inappropriately, these devices can blast air into the subcutaneous tissues. Air emphysema may also be caused by air syringes or cooling sprays from dental lasers. Below are some details regarding the more typical causes of dental air emphysema.

Air emphysema may occur during root canal treatment in several ways. First, air emphysema may occur if the dentist blasts pressurized air down the canal of a tooth. Sometimes, a dentist may use pressurized air to dry the canal prior to adding the gutta percha, which is a rubbery material used to fill the canal after the pulp of the tooth has been removed. This can cause complications if the air escapes into surrounding tissues. Studies suggest that the best way to dry a root canal is to force air across the opening of the canal, which creates a vacuum and prevents forced air from going down the canal.

Air emphysema has been reported after dental extractions, typically where lower molars (back teeth) are extracted and where the dentist uses a high-speed restorative drill that blasts air into the operating field rather than a surgical drill that vents air out the back of the handpiece. The high-speed handpiece is typically used to section the tooth prior to extraction and remove surrounding bone. “Sectioning” the tooth is where the dentist cuts the tooth into several smaller pieces, rather than removing the whole tooth at one time. Surgical drills are designed to vent air away from the operative site and should always be used during extraction procedures, rather than restorative drills that blast air into the operative site.

Crown preparation involves filing down the natural tooth and shaping it like a column to hold a crown on top. During crown preparation, dentists often use high-speed drills to remove the excess tooth material and shape the remaining structure of the tooth. As mentioned above, restorative drills blast air into the operative site, whereas surgical drills exhaust air away from the operative site. When a dentist improperly uses a restorative drill instead of a surgical drill, air emphysema may occur.

Air emphysema as a result of a dental procedure will typically manifest as swelling in the face, cheeks, or neck. Patients may also have serious pain and swelling in the area where the air entered into the sensitive tissues. Additionally, when air is forced into tissues where it does not belong, it can produce a crinkly, crunching, or bubbly feeling in the skin. This is sometimes called “crepitus.” Below is a list of the common symptoms of air emphysema after dental procedures:

If you are experiencing any of the above air emphysema symptoms after your dental treatment, seek medical help right away. If treated early, air emphysema may not cause severe complications. However, if left untreated, air emphysema can cause serious injury or death.

Diagnosis of Air Emphysema After a Dental Procedure

Once a doctor has evaluated the obvious symptoms, like edema and crepitus, the next step is usually imaging tests. Typically, a CT scan of the chest and neck is the most effective test for detecting air emphysema after a dental procedure. Additionally, an x-ray of the neck and chest can be very useful in diagnosing subcutaneous emphysema. Depending on the severity of the air emphysema, the patient may undergo a series of images to fully evaluate the condition.

Air emphysema after dental procedures will often get better on its own within 7 to 10 days after the treatment. During this time, the body will essentially absorb the air in the tissues. Sometimes, patients may be prescribed oxygen or pain medications. Oxygen administration is helpful because it can help the body to absorb the air into the tissues. Moreover, in these less severe cases of air emphysema, the condition can be managed with antibiotics and frequent monitoring to ensure the condition does not get worse.

In more severe cases, air emphysema can lead to life-threatening infection, and it can require surgery. When air is forced into tissues during a dental procedure, the air will typically carry bacteria into those tissues. After all, our mouths are full of bacteria. Left untreated, the bacteria can grow into an infection and spread into the body. When this happens, the patient may need to undergo surgery to open the airway and permit breathing.

If you have suffered from air emphysema after dental treatment, you may be entitled to compensation. A dental malpractice claim could get you compensation for your medical bills, as well as your pain and suffering. You and your family should not be burdened financially by a negligent dentist. Contact us to set up your free legal consultation with one of our dental malpractice lawyers.